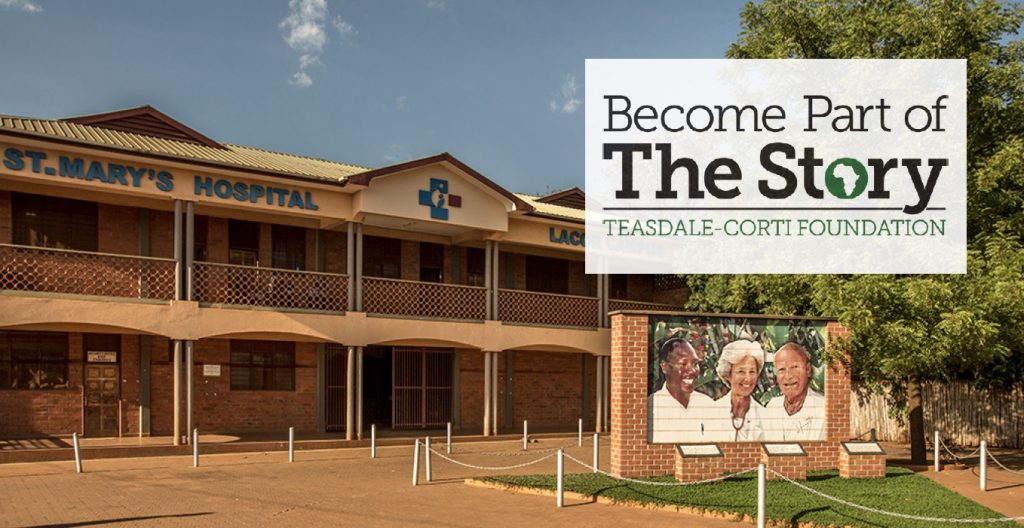 No matter a person’s social status, ethnicity, or religious affiliation, everyone shares the capacity to love. A deep and rich emotion, love can be observed through a person’s actions towards others, and it can manifest in many different forms. Parental love bespeaks of a parent’s willingness to do anything for a child. Friendship, family, and romantic love are familiar feelings to most of us. But there are some things that cannot love us back: our cities, our environment, or our professions.

What kinds of love stories emerge in a setting like a hospital? Lacor has operated for over 60 years, supported by donors from all over the world. With its long history and global reach, Lacor provides the backdrop for thousands of stories from multiple points of view. Many of these stories are tales of love…

This edition of our newsletter offers three love stories. The first tells Dr. Lucille Teasdale’s love for her profession; the second is a romantic story about Dr. Matthew and Margeret Lukwiya falling in love at first sight. The third recounts the tale of two brothers in Canada, Samer and Karim Kachami, and their profound admiration for Lacor and for one another.

This newsletter is dedicated to all people who have loved. Let’s take this holiday as an opportunity to reflect on ourselves and to share with others the love stories of the people we miss dearly and who inspired us during their lives.

Happy holidays to all,

Dr. Lucille Teasdale loved her work so much that she would say that doctors should pay to practice medicine, rather than earning a salary.

Born in 1929 in East Montreal, Lucille was the fourth of seven children born to a working-class family. At age 12, inspired by a story of a Chinese orphanage, Lucille decided she wanted to become a doctor to help the poor. During those adolescent years, she would act the role of a doctor when playing with her sisters: Lise was the mother while Monique, the youngest, played the child. Lucille would put bandages on Monique and promise to return soon to see how her injuries were healing.

In the 1950s, Lucille studied medicine at the University of Montreal; only 8 of the 110 students were women. She was so passionate about medicine that she told Lise that if she couldn’t study medicine, she would do nothing at all with her life.

Lucille interned in surgery at Montreal’s Sainte-Justine Children’s Hospital. Her goal was to become a pediatric surgeon and, to complete her program, she had to acquire training outside Canada. Schools in the United States rejected her application because she was a woman. She was finally accepted in Marseilles in 1960. Dr. Piero Corti, ex-colleague at Saint-Justine’s, joined her in France and offered her a job treating sick people in one of the poorest areas of Uganda. She agreed to help for two months but Piero and Lucille eventually married, then had a child. From the moment she arrived in Uganda, Lucille was in love: with the place and with her profession. She knew she had found her true role.

Lucille’s devotion was frequently tested, especially in the 80s, when she sometimes cut herself on exposed bone fragments during surgeries on war casualties. These incidents exposed her to HIV, for which she tested positive in 1985. Yet, even as her health suffered and her strength failed, Lucille never gave up, only gradually relinquishing her position as she trained Ugandan doctors to take her place. Lucille died of AIDS in 1996 and was buried in the hospital’s compound.

During her career, Lucille performed over 13,000 surgeries. She relentlessly pursued her profession, first conquering social norms to become a female doctor, and later enduring life-threatening conditions—war and her own illness—to serve a vulnerable population—all while training numerous Ugandan health workers to the highest professional standards. At Lacor, she is renowned for saying, “Medicine is not a profession; it is a vocation, a way to dedicate ourselves to the people.” These words resonate; even today Lucille inspires Lacor’s 750 Ugandan employees, medical workers who keep alive the dream Lucille first imagined when she was just a child: to bring health and strength to the poor.

Dr. Matthew Lukwiya, who passed away in the year 2000 at Lacor Hospital as a hero fighting one of the world’s first major encounters with Ebola, profoundly loved his wife, Margaret. This is how Margaret and Matthew met.

In April 1983, next to an open field of deep green grass, Margaret walked with her friends along a red dirt road. Her voice rose with amusement as she chattered.

From the swarm of people emerged a handsome young man weaving his motorbike through the crowd. As he approached, he caught sight of Margaret laughing with a friend. He slowed, then stopped to greet the young women with a broad smile. The women smiled in response but as they moved on, Margaret turned back, intrigued by the man on the motorbike. The sunlight slanted across his face, seeming to shine a lamp on his soul. She stood in awe, her dress blowing gently in the wind.

After a moment, Margaret turned to join her friends, who were giggling and teasing Margaret—they knew the look of love at first sight. Margaret cast her eyes down, reflecting and secretive as the man behind her finally pushed his motorbike into motion. He threw back one last smile at Margaret before disappearing past the green vegetation and colourful crowds lining the road.

Two weeks later, late at night, two armed men walked towards the homes of strangers. Stopping in front of a house belonging to Margaret’s aunt, they peered into a bedroom window, searching for a way to enter.

From inside, Margaret’s aunt noticed the shadows of men and guns, and dashed into her backyard. She jumped over a short wall, falling into the bushes and breaking her leg. The commotion scared the men, who ran off into the night.

Soon after, Margaret learned of her aunt’s injury, and accompanied her on the long and crowded bus journey to Lacor Hospital. When they finally saw the large hospital sign, they sighed with relief.

In a hospital room, Margaret waited for a doctor to attend to her aunt; she was annoyed and tired, reading a book to pass the time. She barely glanced up when a man entered the room, but when he cleared his throat and gestured to an x-ray of her aunt’s leg, Margaret was startled to recognize his face: it was Dr. Matthew, the man on the motorbike. Recognition flashed across Dr. Matthew’s face, too. Flustered, Margaret glanced away. But once her aunt was resting, Dr. Matthew approached Margaret and asked if he could take her on a date. Margaret covered her nervousness with a smile, tilting her head in a confident nod of acceptance. The pair grinned at one another in open delight.

Karim was more than a brother to Samer Kachami; he was his best friend. It was Samer who brought Lacor Hospital to Karim’s attention. To them, the Foundation represents the beauty of altruism—joining people in Canada and Italy to people in Uganda, a country whose war lasted over 20 years. Samer was moved by Dr. Lucille, a woman who could have become wealthy practicing medicine in Canada, but who chose instead to stay to help those afflicted by violence. Samer also came from a war-torn country.

In 1971, Samer moved from Egypt to Canada with his parents and grandmother. 8 years younger, Karim was born in Montreal in 1973. Unfortunately, Samer and Karim lost their father to a plane crash that year. Ever since, Samer and Karim have been inseparable.

When their mother passed away from cancer in June 1998, Samer was unable to carry out his wedding plans four days later. Karim, whose own wedding was planned for a month later, suggested they share a double ceremony. After the wedding, the brothers decided to move closer to each other—less than 200 metres apart—as a way to mourn their mother’s passing and to ensure they would always remain close.

In September 2007, Karim was diagnosed with leukemia, and he passed away ten months later, on the tenth anniversary of the brothers’ double wedding ceremony. Samer was devastated. He buried himself in his work as a teacher, but doctors forced him to take a few months off to grieve. Today, one way he remembers his brother is to look at old pictures. In Karim’s honour, Samer continues to help Lacor and encourages people to donate. He says, “A small amount can make a big difference. In fact, at Lacor, it takes on average only $25 to treat a child.”