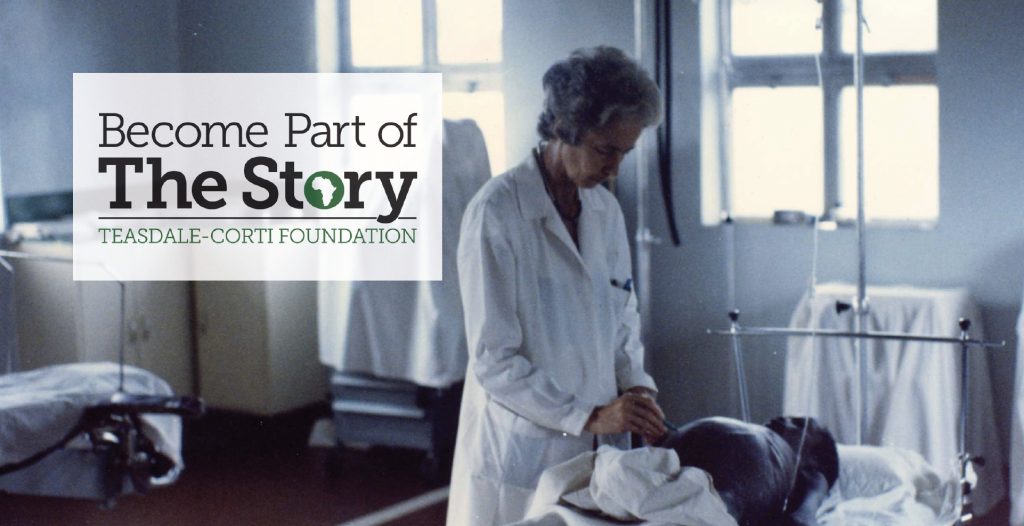 Each year, December begins with World AIDS Day on the 1st of the month. It provides an opportunity for people to unite in the worldwide fight against HIV, to show support for people living with HIV, and to commemorate those who have died from an AIDS-related illness.

In Uganda, Lacor Hospital works hard to prevent the spreading of the disease and to treat the people who live with it. In doing so, it follows an example set higher on up, since it was the very disease that took Dr. Lucille’s life. Back in 1982, victims of a mysterious “slim” disease began to appear at the Lacor. After treating one of them, possibly as far back as 1979 when she performed surgeries on casualties of war, Lucille cut herself with sharp fragments from shattered bones. She would test HIV-positive in 1985, when the first tests became available in Italy.

Despite her failing health she continued to work, especially in Lacor’s adult outpatient and AIDS/Tuberculosis department, gradually relinquishing operations to the Ugandan doctors she had trained. A few months before her death, with her weight down to 40 kg, she was still carrying out 4 to 6 hours of outpatient clinics a day. She was sometimes too weak to get up in the morning so her husband Dr. Piero or others would place an IV line to rehydrate her. As soon as she felt better, she would remove the needle herself and go to work.

Lucille Teasdale passed away in her home in Italy on August 1, 1996.

In her memory, Lacor Hospital continues its work preventing and treating HIV/AIDS.

In this issue, we are proud to introduce you to that work and to the people whose life depends on it.

In Uganda, some 1,300,000 people live with the human immunodeficiency virus (HIV) while in Canada, at the end of 2014, there were a little over 75,000. In Uganda, it is mostly people between the ages of 35 and 39 who contract it, and among them women are the most vulnerable.

So what kind of care does the Lacor provide? How is it organized? This is explained by Dr. Emmanuel Ochola, head of the HIV Research Department. “We have a care program with treatment and counseling that goes beyond an AIDS clinic. The whole hospital is involved: Diagnoses and counseling are provided in each department and in the community.” Today, some 8,000 patients on antiretroviral therapy are followed at the Lacor Hospital: 9 % are under 15 and 69 % are women.

“We have an awareness-raising program to carry out tests and provide treatment in the most remote areas”, continues Dr. Ochola. This is why the Hospital has set up a network of relationships with some key people in various communities. “The purpose of the Hospital is to contribute to the national fight against the spread of AIDS,” he points out. In this regard, the greatest challenge is to access the treatment program. “Reaching the poorest and most isolated areas is a problem, and reaching those who fear to test is another. Transportation is still the major obstacle for people to remain in therapy.” That’s why there is a network of people who are part of the community and are connected to the Hospital: They liaise with the hospital to take blood samples for control tests and distribute antiretroviral drugs, for instance, in communities. If someone does not show up, they are called and reached, and there are also specific community drug distribution points were drugs are taken monthly. Also, thanks to this service, compliance with the treatment is improving, with high viral suppression.

Lacor CEO Dr. Cyprian Opira adds: When you discover you are HIV-positive, you do not expect to have an easy life. You will not die, but there will be physical, psychological and social repercussions. Knowing there is a place where you have friends and can find comfort encourages you to come to the Hospital and to follow the therapy.” It’s a way to look at the future head-on, despite HIV, and do prevention to prevent it from spreading.

Aber is a determined woman who lives with six children in Alero, about 26 kilometers away from the Lacor Hospital.

“I’m going back to the Lacor not just for life-saving drugs,” she explains, “but also because I get advice and I feel taken care of and supported there. The health workers are very helpful and provide important support. Since I first came to the Lacor I have had five children and none of them have HIV.”

The history of Aber’s disease begins when she fell ill in 2004. As she recalls, “antiretroviral therapy was not available yet. I came to the Lacor and they did an analysis for HIV and other infections. The news was one of the worst, but I had to face it.”

In 2007 Aber returned to the Lacor and took the test again. The results were no different but then she decided to start taking antibiotics as the doctors suggested. Her health improved, and in 2008 she began antiretroviral therapy.

“I have been undergoing antiretroviral therapy for ten years and I have not had any health problems. I feel strong and work hard”, she confides. “So much so that my neighbors, who do not have HIV, sometimes come asking for help when their crops have gone bad and they do not have enough food. Thanks to this land that I cultivate day by day I managed to feed my family and send my children to school.”

Due to the lessons she has learned from the Lacor’s staff, Aber has been able to prevent her children from contracting the HIV, to keep following the therapy and therefore to suppress the viral load. She also learned how important it is to talk about the human immunodeficiency virus: Her children help her remember to take her pills at the right time because she talked to them about the disease.

Here is the advice she gives to women: “If you find yourself HIV-positive, follow your treatment and live positively to be useful to your families and communities.”

She continues: “Had the Lacor not helped me in so many ways, I probably would not be alive today to feed my children and educate them.”

Aber also has a message for the donors who are doing a lot for women like her, she says. “Donors do not know me or anyone here, but they care about humanity and support us, which in many cases, gives life back to a person.”

During the Holidays, it is customary to exchange all kinds of wishes. Of happiness. Prosperity. For a long time, we wished ourselves “paradise at the end of our days” and “peace on earth for people of good will”. Traditions are changing, and it is now more and more common to simply wish oneself “good health”.

In Canada, we are very fortunate to have universal coverage for medically necessary health care services, which are delivered on an as needed basis rather than the ability to pay. In Uganda, given the country’s poverty, the government does not have the means to afford a health service like that of Canada, which is supported by a system of taxes paid by the population.

That is why the Lacor patients need our support, and we can do something concrete: to participate in the “Become Part of the Story” campaign.

As part of this campaign, the General Care chapter subsidizes patient care, such as Aber, with HIV, but this section also supports people with a variety of health issues, such as malaria, tuberculosis, cardiovascular disease, diabetes and cirrhosis.

For Christmas and New Year’s Day, we would like to take a moment to wish everyone, Ugandans and Canadians, a “good health”, and to everyone who is fighting a disease, the Teasdale-Corti team sends warm thoughts and wishes a speedy recovery, hoping to see you on your feet again in 2019!